These past few weeks has been eventful. With less than 3 months till departure, I’ve started to make real preparations for departure – applying for passports, visas, and making appointments for my immunizations and Diplocat check-ups. I foresee things getting more hectic as the time draws nearer.

I’m trying to make the most of my few remaining 3 day (federal holiday) weekends. A classmate and I decided to hop a plane to California for the MLK weekend to experience Big Sur. We flew into Los Angeles and then made our way up the coast to Big Sur. 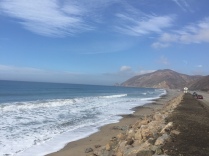 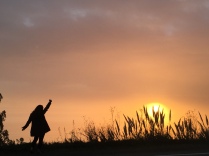 The weather was fantastic and the food delicious. It was really everything we could have wanted out of a mini vacation. We were both sad to leave California, and I’ll be glad when I get the chance to go back and spend more time. Maybe my next home leave??

This past week, we recieved news that there would be a blizzard. Many people scoffed at the news at first. However, as the week progressed, apparently the weather channel got more certain that this would be a doozy. The oncoming storm was dubbed “SnowZilla,” and was forcasted to be the storm of the century.

On Friday, OPM (the Office of Personnel Management) made the decision to close the government at noon. This meant that I went in to Bangla class for a whole hour before coming back to my apartment to hunker down. The snow started off slow and picked up over the next 24 hours. Saturday afternoon was the first time the blizzard showed its full force. Visibility was low and snow swirled all around. Being from the South, this was something I’d never really experienced before. I was glad I’d made the decision to pick up an extra half-gallon of milk.

Diplocat and I watched a lot of movies, I did some of my Bangla homework, and attempted to make various meals. On Sunday, the sun shone brightly and I decided to venture out to see what havoc this blizzard had infliced on the DC area. Plus, I was getting stir-crazy. Walking around town was a mixture of strolling on well-cleared sidewalks and climbing up mounds of snow in areas that hadn’t been touched by plows. 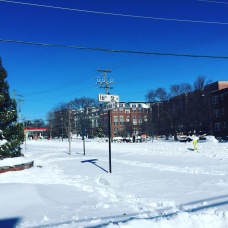 Sunday evening it was announced that we would be closed on Monday as well. I wasn’t surprised because many of the roads around me hadn’t been touched by plows or crews. I am hoping that we go back tomorrow since I miss class and my classmates already. It’s been a good break, though.

I remember commenting around Christmastime that I wanted to see a snow before going to Bangladesh. In my mind, a 6-8″ storm would have been great. I did not ask for a blizzard to dump two feet on this city! Be careful what you wish for…