One Week In Dhaka

So I arrived safely in Bangladesh, and have spent the last week getting my bearings and learning the ropes. I’m still definitely a little lost – it’s a huge learning curve, but I’ve enjoyed my time here so far. I wanted to tell you a little bit about the fun that is trying to transport a cat across the world.

I was able to spend a couple of days in New York City with my parents while I did last minute meetings. I was pretty exhausted as I’d just gotten over bronchitic and laryngitis, so we mainly hung out in the hotel room with the kitty. We had a little accident in the Washington D.C. airport (think holding tight on to a squirmy kitty in an airport bathroom stall while trying to wipe poo out of his carrier – least fun ever!). The flight to NYC was also incredibly turbulent due to high winds, which didn’t make things any better for Mus.

Anyway, NYC went quickly and I ate some delicious food before heading to JFK with my parents. I check in to Air France, and find that I can upgrade to business for a very affordable price, so I do so. I ask if I can check my bags all the way to Dhaka, and the supervisor comes over and informs me that I will not be able to import Mus into Dhaka if he comes in-cabin with me. Therefore, they refused to check my baggage all the way, but only to Istanbul. As this was contrary to anything I’ve ever heard, even from Turkish Air (who would be the ones I would on the last leg of the journey), I was not happy and told them so. They did not care. They agreed to put a provisional check-through on the luggage, and said Turkish Air could decide whether to let my checked baggage go further.

My parents and I said a sad goodbye and I headed to security with Mus. Now, if you’ve never travelled with a cat, you might not know that TSA makes you take your cat out of their carrier and you have to walk through the X-ray machine with the cat. And Mus, while a delightful cat in general, hates behind held except for that 5 minutes when I come home from a long day of work. I had visions of Mus running through the airport, never to be found again. So I requested a private room that could lock. TSA looked a little put out, but agreed. They took him from me so I could walk through the X-ray, and I got to the other side and gather my things. One shoe achieved…and the 2nd shoe was not to be seen. We looked all around, and it’s just…gone. They were still holding my kitty in his carrier and I’m shoeless. They asked if maybe we can go into the exam room while they seach for my errant shoe. I agreed, not wanting to prolong Mus’s distress. 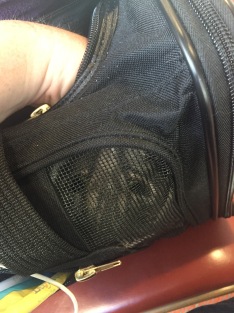 Petting him through the carrier calmed him down

We went into a tiny room that was filled floor to ceiling with files, and they refused to close the door because they only had one TSA agent who could watch me. So I got a good grip on Mus while he tried to be anywhere but where I wanted him to be. They had to take the carrier away and x-ray it. At least there was a table I can basically wrestle him down on. About 10-15 minutes later, somebody came in triumpantly with my missing shoe, and a little bit after that, somebody returned my carrier. I manhandled Mus back in and we go on our way. Thankfully, business class upgrades also come with business class lounges, so I was able to take Mus somewhere quiet after our ordeal.

My JFK to Paris leg was pretty uneventful, with one exception. As we were waiting to take off on the runway, I was still checking my email and other things. I decided to try to check which gate I would be going out of in Istanbul for the last leg. To my horror, this showed up: 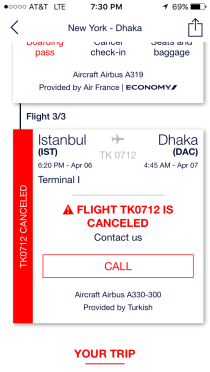 I frantically sent out messages to my social sponsor and my parents. But there was nothing else I could do at that point. I tried to not panic, and enjoy my last view of America. Other than this, the flight was normal. Mus cried a little bit, and I tried to get as much sleep as possible because I knew this would be a very long journey. Luckily I can sleep pretty much anywhere, so I got about 4 hours of sleep on that journey. Paris itself was also fairly uneventful, except that during check-in at the gate, the flight attendant told me my carry-on was too large and they would need to check it. I told him I wasn’t staying in Istanbul, which it was a connection, and he said that it would be fine and I would be able to get it in Istanbul. My social sponsor was also able to reach out to Turkish and it turned out that the flight was NOT cancelled, thank goodness!

I arrived in Istanbul after a verryyy uncomfortable ride on a very cramped plane (Mus was equally unhappy and let his unhappiness be known). I got a little bit of a doze in but it was difficult with no leg room and feeling clausterphobic. It was a relief to make it to Istanbul, knowing I only had one last plane right to Dhaka. However, my bag was nowhere to be seen!

I finally found a counter and they told me my bag was outside of customs. I explain that I was not intending to enter Turkey and I have no visa and I have a cat, and that I need my bag because it has important things in it. They helpfully replied “Well, if you have important things in there you should carry it on…” I tell them that I tried, but my bag was taken from me. I wait, nearly in tears (ok, actually in tears), for about 20 minutes while the agent called various people. She told me I can go buy a visa and get the bag, then come back in, or I can get the bag checked to Dhaka, in which case it would end up there sometime in the next week. I dejectedly find the visa counter and buy a visa (thank goodness, just $30). I tried to tell the customs folks my predicament, but they clearly didn’t care and just stamped my passport. I went to the place I’m told to go in the baggage claim, and no bag visible. I go to another one, and again, no bag, but there is at least somebody manning the desk. I am nearly in tears again because Mus is heavy, there are no carts available, and this baggage claim is pretty large. The man tells me my bag is on the other side of the baggage claim, where I’ve just come from. He sees I am visibly upset and asks why. I say “I’m tired and I can’t find my bag!” He replies “You cry for tired?” “Yes, YES I DO CRY FOR TIRED. I WANT MY BAG.” I go back down to the other side and finally find the bag. I grab it, so relieved, and make my way out to the terminal to get back in to International. My gate is of course the end of the end of the end, and then down in its own little creepy basement. Luckily, there’s a handicapped bathroom I can let Mus out in to stretch his legs. This is also the bathroom where people sneak in cigarettes too, as there were about 100 butts and it smelled very strongly of smoke. Mus isn’t happy with the smells but glad to stretch his legs.

I board the plane and am happy to see that the seats are a little larger than the last one. Also, my neighbors are all Bengali, and super nice! We chat for some time and I relax. Seven hours later, at 4:45am, I arrive in the Dhaka airport. My social sponsor greeted me enthusiastically and we proceed quickly through customs to the baggage claim. Gloriously, both bags arrived (one zipper broken, but everything still inside).

My first few days were a blur of shopping and meeting people. I ended up staying up until 11:00pm on the night I arrived because I went to a trivia night, and then had to pick up my “new” car I’d purchased. I started work last Sunday and have been filling out paperwork and meeting people ever since. I’ve been able to observe some visa interviews, which were fascinating. My house is amazingly spacious, and I’m having fun slowly decorating it. The bed is comfortable, and my air freight items are supposed to arrive soon which more of my stuff. 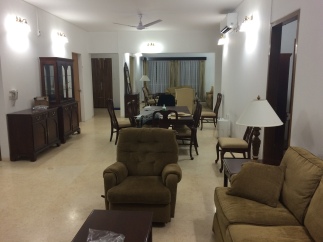 Wednesday night, I was home resting and eating some dinner. As I munched on some food, I kind of felt a bit weird, and then I noticed a bag on my table was swaying, then saw that my glass of root beer was also swaying, which I thought “Huh, that’s odd.” Then suddenly my world started shaking alarmingly. I dove under the table and saw Mus hurtling towards the couches. I had no idea whether the walls would fall down on me or what exactly was going on. I texted my social sponsor and asked “Is this what I think it is?” She replied “Yes, stay away from the windows.” It was an earthquake. The epicenter was in Myanmar and it was estimated to be about 6.9 on the Richter scale. After the floor stopped shaking, I came out from under the table and at that point, my upstairs neighbor came down to check on me and we chatted for a bit. My cat stayed hidden for the next couple of hours and I kept feeling like the earth was continuing to sway. I think that was my official “Welcome to Dhaka!”

Yesterday was the Bengali New Year (Pohela Boishakh). I went to a fun house party with my sponsor, then on to an engagement roof-top party at another officer’s house. It was a lovely day and great to meet and talk to people. Today I’m going to dinner with some new friends and another party – my social life has definitely increased since coming here! Mus is also enjoying his increased space, though I think he’s a little more jumpy than he was in Virginia. There are all kinds of strange noises that come from outside (and inside, for that matter!). He does enjoy staring out the windows at the street below. And sleeping, of course. 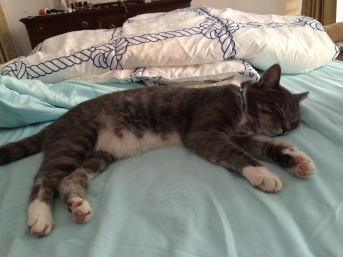 Well, I am off on a shopping trip soon so I’d better wrap this up. I’m happy to be here, and happy I brought little diplokitty. More later!